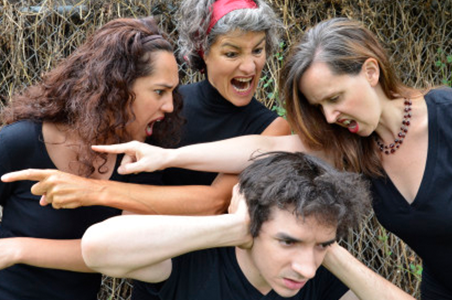 Where: The Metal Shop

Since the beginning of time, the three Furies have dedicated their immortal lives to the ancient, honorable moral principle of a slit throat for a slit throat. But when a young man walks into hell seeking help to avenge his father’s death–by killing his mother–they draw the line. And when he ignores their warnings against matricide and then begs for mercy, the moral order of the universe hangs in the balance.

According to the UC Berkeley Daily Californian,

“Just Deserts” is offering something surprisingly new, and drawing a new audience. It is absolutely worth seeing, with or without a grasp of Greek mythology. This play works on multiple levels, and satisfies as diverse an audience as it attracts.

JUST DESERTS played from August 29 – September 4, 2014, at the Metal Shop Theater in Berkeley and September 8 – 9 at Saint Mary’s Colllege of Califronia, where the performances were a featured event of the co-curriculum for the sophomore class. The show was a featured event on the BerkeleySide “It List” and an Editor’s Pick of Theatre Bay Area Magazine, where critic Lily Janiak wrote,

Lashof ingeniously channels both what many treasure about Greek mythology–its pitting of evenly matched foes in debates that dig deeper and deeper as combatants seem to be going in circles–while also skewering its misogyny.